Caffeine And Our Brains (Should We Have That Second Coffee?)

Coffee is a habitual bliss for many. It was the same for me for many years. I could drink three or four cups of coffee in a day without being largely affected. Sometimes I drank coffee just to pass the time.

Coffee is a habitual bliss for many. It was the same for me for many years. I could drink three or four cups of coffee in a day without being largely affected. Sometimes I drank coffee just to pass the time.

It wasn’t until I had a very jittery few days and withdrawal headaches that I realised just how much coffee controls our everyday function.

I’m not here to badmouth coffee. I love coffee. In fact, coffee has many benefits on our neurological health. But how much caffeine is too much, and are there better alternatives that won’t leave us with the 3pm coffee crashes, or withdrawals?

As we all know, the caffeine in coffee is a stimulant to the central nervous system. As such, it can improve mental performance and focus. It also helps to keep us alert, and can improve our attention and concentration.

As well as this, coffee has an ergogenic effect, which helps us perform when it comes physical activity, and increases our capacity to do exercise or work. This may be because it can lead to raised adrenaline levels and increased blood flow to the heart and muscles.

Studies have also shown that regular coffee drinkers have a reduced risk of developing Alzheimer's Disease, Parkinson’s Disease, and have slowed rate of age-related cognitive decline.

As great as these benefits may be, caffeine can also have an adverse effect on our bodies. Although some studies have shown that caffeine can enhance memory and performance, it can have the opposite effect if a higher intake is consumed.

Too much coffee can hinder rather than help you. Higher intake can make us less attentive and decrease productivity, possibly due to overstimulation.

Some people may argue against this point, but you can’t actually be physically addicted to coffee. You can however be habitually dependant on it, which can lead to withdrawal symptoms if you abruptly abstain from coffee, such as strong headaches, sleepiness and irritability.

What’s more, studies have proven that abstaining from caffeine for a whole day can help to improve sleep quality. And with no caffeine, sleep patterns are more regulated.

Caffeine can also make us agitated. Got the nervous fidgets? You should probably lay off the coffee.

So it has been proven numerous times that coffee is both good and bad for us. According to the the Natural Nutritionist, Steph Lowe, we shouldn’t have any more than 200mg of caffeine per day, which is about two cups of coffee.

But is there another way to get our energy boost that will get us through that afternoon slump that we all know too well?

Yep! There sure is, and not only will it boost your cognitive function and performance, but the other benefits are both surprising and amazing. 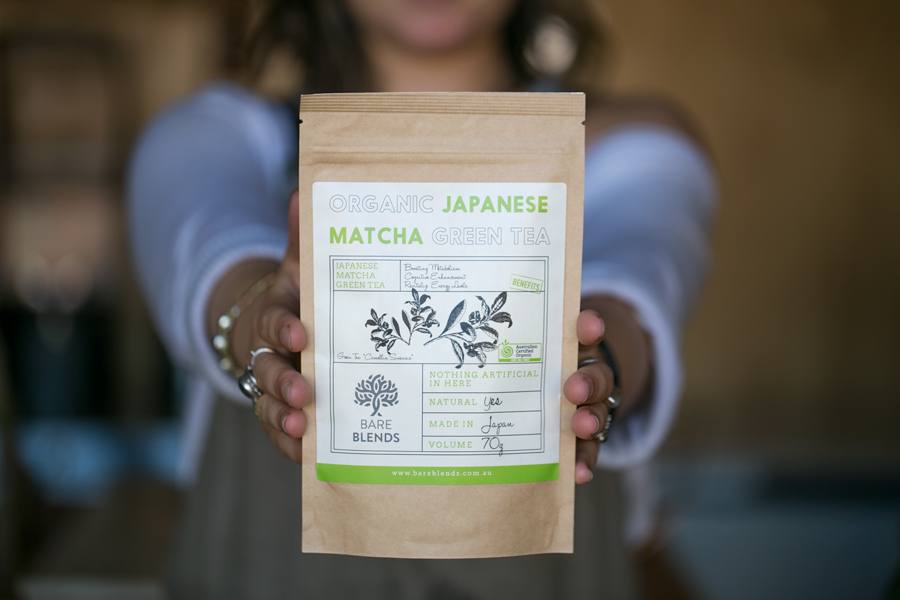 Our Organic Japanese Matcha Green Tea is grown in Kyoto, Japan and is naturally high in health-promoting tea catechins, chlorophyll and amino acids.

As well as being full of antioxidants, matcha will help with cognitive function, boosting your immune system, and reducing stress.

According to The Journal of Chromatography, matcha contains 137 times more antioxidants (including anti-cancer EGCC) than green tea. Matcha is so full of antioxidants that it's been deemed the anti-aging tea. It also oxidises fat stores within the body to promote weight loss.

Matcha does contain a small amount of caffeine (about a third of that of a cup of coffee) but there are no jitters or caffeine crashes associated with matcha. This is because matcha also contains an amino acid called L-Theanine, which has a natural calming effect on the body.

According to Biological Psychology, when mixed with a small amount of caffeine, L-Theanine has been proven to induce faster reaction time, faster numeric working memory time, and and improved sentence verification accuracy.

What’s more - there are absolutely no downsides to drinking matcha. No caffeine crashes, no withdrawals, no overstimulation, no moodiness or fidgeting.

It’s definitely a winner in my books.

So I’m not telling anyone to give up coffee. But instead of having that second cup of coffee in a day, try having a matcha latte instead. It will do you a world of good.

De-stress In 5 Minutes With This Breathing Exercise

Feeling a bit stressed, overstimulated or maybe just a bit out of sorts? ...

Unfortunately many vegan products on the market, especially meat alternatives, are made with very questionable ingredients. ...

Adaptogens: What Are They And How To Use Them

Adaptogens are the plants that help your body adapt to combat imbalances and manage stress. So how exactly do they work? ...